Thumbing through a pile of back issues, I decided to give these three Fantastic Four Annuals a re-read for possibly the first time in 35+ years, and it wasn’t entirely unpleasant.

First up, FF Annual #13, on sale in July 1978 (so spoilers for FF #200 that came out a month later in August 1978; yeah the Fantastic Four get back together as a team), written by Bill Mantlo and drawn by Sal Buscema (inked by Joe Sinnott).

The Mole Man is up to no good, stealing statues, and kidnapping all the ugly and blind folk from the streets of New York. So it’s a no-brainer that Alicia Masters is on his hit-list (being both a sculptress and blind  - duh!), which means the newly reunited Fantastic Four get involved in his dastardly plot to give all those ugly and blind people a place to call home beneath the Earth’s surface. No matter that they’ll all be dimly lit; they’ll no longer be ostracised from an uncaring society and will have all these beautiful statues to look at. Can anyone else see (no pun intended) a problem with that?

Anyway, the Fantastic Four bust up on the Mole Man and his Moloids until Alica breaks up the fighting by pointing out that the Mole Man’s intentions were good (though probably misguided), and that many of those he kidnapped are more than happy to shuffle around in the near dark, bumping into statues and being reminded of their lack of good looks. So as a parting gift she sculpts a statue of the Mole Man in all his glory, he’s happy, and the Fantastic Four depart - along with a few of the kidnapped citizens that required some medical attention from falling over all those stolen statues just lying around. I made that last part up.

Despite being dumb, this was an enjoyable read. I especially liked how Mantlo portrayed the Fantastic Four’s interactions with other New Yorker’s while wandering around the city, and Sal Buscema, as far as I’m concerned, was THE Marvel Bronze Age artist. Reading this issue was like sliding my feet into an old pair of slippers - so comfortable.

Annual #14, on sale in October 1979, written by Marv Wolfman and drawn by George Perez (inked by Pablo Marcos) was a perfect example of why you should never judge a book by its’ cover. Behind a rather dull Franklin Richards cover was an unexpected delight; not so much a Fantastic Four story, but a spotlight issue for Agatha Harkness. Who totally kicks ass.

The Fantastic Four (with Franklin) accompany Agatha on her yearly sojourn back to New Salem, so she can lead the New Salemnites (?) in their annual ritual to cleanse their magics. Obviously, Salem’s Seven and Nicholas Scratch get involved and it all goes to hell; but the Fantastic Four are almost incidental in their own book, as it is Agatha who takes the lead in sorting the whole mess out (with a little help from Franklin and his not so dormant cosmic powers).

This issue was thoroughly entertaining, helped not-just-a-little by  Perez’ dynamic pencils. Though I’ve never been a fan of Pablo Marcos’ inks, they were tolerable here.

Which is not something I can say for Annual #15, on sale in July 1980, written by Doug Moench and drawn by George Perez (inked by Chic Stone),  which was was quite frankly a bit of a mess.

I’m not even sure I can summarise the plot for this one; it involves Reed inventing some kind of teleporting machine by accident, some invading Skulls, and Captain Mar-Vell. And some time travel hilarity. Or not.

I never really enjoyed Moench’s time on Fantastic Four, and this issue pretty much cemented my feelings on that. However, there was a really nice back-up story (written by Moench and drawn by Tom Sutton) that shows Zorba failing to maintain his newly liberated Latveria, and the ultimate resurrection of Dr Doom. A lot of nice ideas here about newly democratised people not really feeling the love for their new status quo.

Unemployment, higher taxes, and lots of picketing; yeah, that’ll get you down. What you really need is a megalomaniacal terrorist in charge. Sorted.
Posted by Terence Stewart at 01:04 13 comments:

The Scarlet Witch rarely got a chance to shine during the Silver Age, constantly overshadowed by her overbearing twin brother, Quicksilver. From the moment they joined The Avengers, they remained inseparable, so Roy Thomas writing Pietro out of the Avengers was both a relief, and an opportunity for Wanda to develope away from her brother’s overprotective custody.*

So it was appropriate that Steve Englehart opened his first issue with a full page splash of Wanda in full tilt. 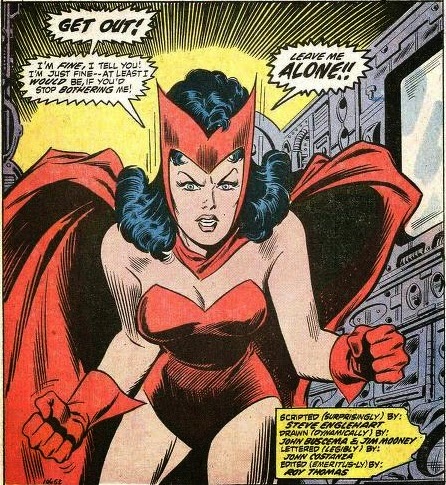 Unknown to The Avengers, and his sister Wanda, Qucksilver had travelled to Australia to rescue her from the Sentinels, but had been severely wounded in battle. Just as he was losing consciousness, a monstrous form appeared and whisked him away. So it was little wonder that Wanda was in a particularly fretful mood, and ready to take her frustrations out on the seemingly unsympathetic Iron Man and Hawkeye. 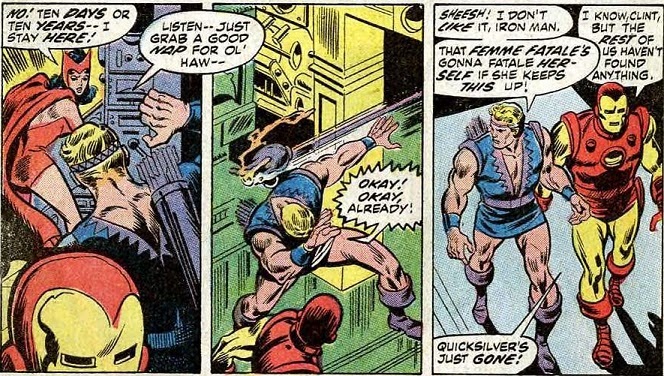 This was a plot that Roy Thomas was developing for another title, Fantastic Four, but Englehart turned it to his advantage, using the Avengers’ search for Quicksilver as an excuse to further examine the fraught relationship between the Scarlet Witch and The Vision,
Wanda learns that some scientists have been kidnapped in Chile, and by some suspect reasoning, believes this may be linked to Pietro’s disappearance. So with little ado, The Avengers, with the newly returned Black Leopard, sorry, Panther, and house guest Sif, jet off to Tierra del Fuego.

The appearance of The Black Panther, Sif and assorted Asgardians, The Vision’s return from battling the Puppet Master in Marvel Team-Up #5, and passing mention that Captain America has left on a personal matter, is a perfect example of Englehart’s willingness to fully embrace continuity, reinforcing the concept of the Marvel Universe as a cohesive whole.

Blasting through a sealed up cave entrance, The Avengers soon find themselves in the Savage Land, home of Ka-Zar, and Magneto’s Mutates, the Beast-Brood.

After an initial skirmish with the Beast-Brood, the enlightened Hawkeye checks in with Wanda: 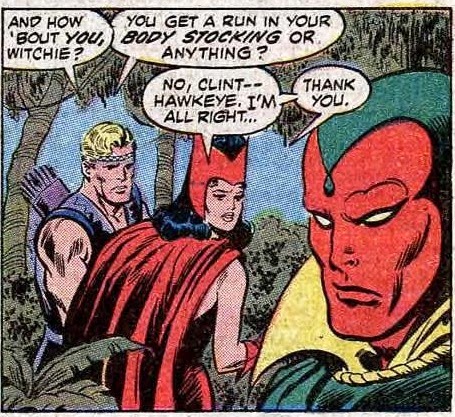 Yeah, Clint’s still got some ways to go in relating to the opposite sex.

Coming across an abandoned, and destroyed, complex, The Avengers find an unfamiliar costume that they presume belonged to The Angel, and the remaining members of the Beast-Brood. 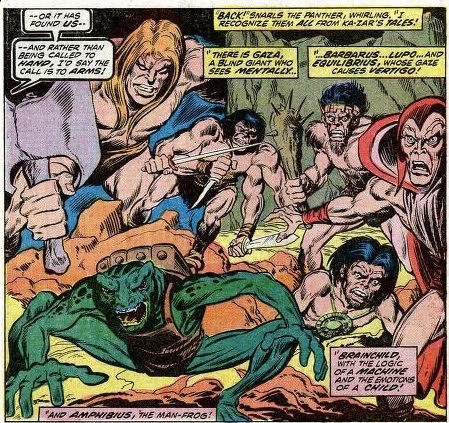 Just as The Avengers defeat the Mutates, Lorelei appears and enchants the male members of The Avengers with her siren song. All, that is, except The Vision who summarily dismisses the threat. Unfortunately, the fact that he was unaffected by the siren song of Lorelei leaves The Vision decidedly downbeat. 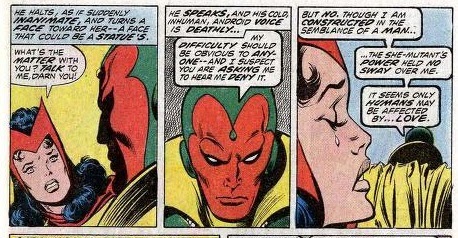 Succinctly, Englehart used the wild goose chase in search of Quicksilver to introduce Lorelei, and her power over human men, to cast some doubt in the (computer) mind of The Vision as to whether he was truly able to love a human. And if not, what would he do to make it possible?

We’d soon find out, with the reappearance of The Grim Reaper in the next issue.

As a first issue goes, not bad. It was a little rough around the edges in places, but Englehart’s enthusiasm, and obvious love for the material, overcomes any problems with the plotting. It is Englehart’s attention to characterisation - and detail - though, that really stands out, and will become a defining feature of Engelhart’s Avengers as he becomes progressively more comfortable with the team.

*I always found the twins a tad suspect, yet never had a problem with Wanda falling in love with - and eventually marrying - the Vision. I suspect this had a lot to do with my nascent sexuality, and a need to identify with people and relationships that did not exactly fit the mold. That, or I was just weird.
Posted by Terence Stewart at 07:02 9 comments:

Email ThisBlogThis!Share to TwitterShare to FacebookShare to Pinterest
Labels: Steve Englehart, the avengers, The Scarlet Witch, The Vision

From the Savage Land to an Alternative Earth: Steve Englehart’s Avengers from 1972 to 1976..

After six years, it was time for Roy Thomas to move on. He handpicked his successor, Steve Englehart - a recent addition to the Marvel Bullpen - to continue chronicling the adventures of Marvel’s premiere team, and in doing so, kick started Marvel resolutely into what is now fondly referred to as the Bronze Age of comics (by fans of a certain age).

Englehart’s writing career at Marvel - leaving aside a few done-in-ones for the mystery and romance mags - began in earnest with The Beast feature in Amazing Adventures #12 (on sale date February 1972), before taking over as the regular writer on Captain America with #153 (on sale date June 1972). Just two months later he took on the writing duties of Earth’s Mightiest Team, with the Avengers #105 (on sale date August 1972).

It wasn’t a completely smooth transition though, as Roy Thomas left a number of dangling plot lines for Steve to pick up on, not least the developing romance between the Scarlet Witch and The Vision - brewing since just before the start of the Kree/Skrull War -, and The Grim Reaper’s macabre offer to The Vision in #102. Luckily for Thomas, Englehart was one of the new breed of creators, raised on Marvel’s continuity conscious comics of the ‘60s, and not afraid to play with the tapestry that Lee, Kirby, Ditko and many others wove during the preceding decade.
Posted by Terence Stewart at 12:39 3 comments:

Because you demanded it! Or maybe you didn’t...

After an unscheduled, and lengthy, absence from posting, I think I may finally have got my Bronze Age mojo back.

The last 17 months have been tumultuous; comparable to a low selling mid ‘70s Marvel comic, with no direction and a writer and/or artist change every other issue.Thank Galactus, I’m in a very different place now, both figuratively and physically - I am never moving again with that many boxes of comics! - and certainly more settled. So settled in fact, that I’ve pulled out my longbox of Bronze Age Avengers and started reading Steve Englehart’s massively influential four year run on that title, from #105 (on sale date August 1972) to #151 (on sale date June 1976).

So, what better way to get back into the swing of things than to write up my thoughts as I go?

Coming soon: Can an Android love a Mutant? 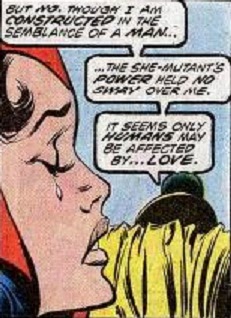 ps for those still wondering after all this time, The Cat won the Top Bronze Age Heroine poll.

I did not see that one coming.
Posted by Terence Stewart at 13:46 4 comments:

My favouite fanzine (though it was professionally published) in the 80s was Amazing Heroes; and my favourite articles were the ' Hero Histories'. Didn't matter who they were, or where they were from, they were always a source of interest.

My recent Frankie Raye post was very much influenced by those articles, and it's something I would like to do more of - the only problem is who to do?

With that in mind, I've set up a little poll in the right-hand column. Vote for your top Bronze Age Heroine, and I'll write about her. I should say, I took a few liberties: The Cat and Tigra are essentially the same person, but very different heroines, and though Jean Grey was a heroine during the Silver Age, Phoenix was very much a Bronze Age creation,

A tour of Bronze Age Marvel on Tumblr, one panel at a time... 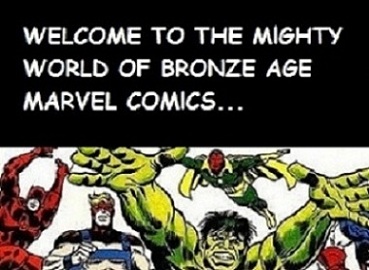